The movie “Pay It Forward” revolves around the idea that the receiver of a good deed must in turn pass on good deeds to others in order to make the world a better place. In the spring of 2005 two friends and I were the recipients of a potentially life saving deed. Approximately one year later, we quite unexpectedly were able to pass the same deed on to three others. The whole experience left us amazed at how such a series of events could occur.

Our version of “Pay It Forward” took place in Ontario, Canada on one of those huge, picturesque lakes called . Bald eagles, moose, black bears, beavers, and loons are the primary inhabitants, and we saw them all. But of course the Walleyes are why we spent sixteen hours driving each of the last three years. In the spring of 2005, my two fishing buddies and I were returning to our cabin at the Thunderbird Resort after a long day of fishing. Suddenly, the unexpected occurred, and our fishing trips took on a whole new meaning. 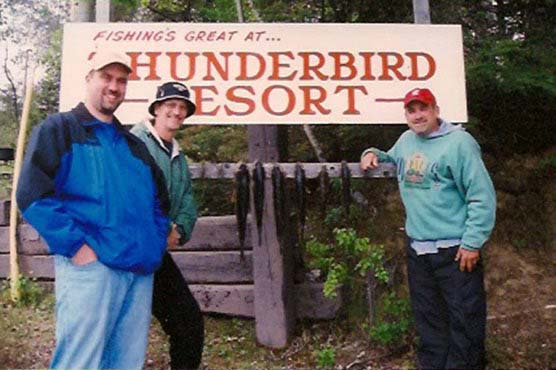 The sun had just dropped below the horizon and darkness was only about a half hour away. We were cruising through the winding bays of this massive lake at about 40 miles per hour when our boat suddenly struck a rock below the surface. The sound was like a cannon going off and our boat came to an abrupt halt in the water. Our motor had hit the rock and was useless. We were still six or seven miles from our cabin with no communications devices. We had no oars and just our electric trolling motor. We started up the trolling motor, but after going less than a mile our battery charge was getting very low and we knew the trolling motor would soon be useless as well. Our options were few and we realized quite quickly that we might be stranded on the lake overnight until we could hopefully flag down an early morning fishing boat. Even though it was a relatively calm evening, the evening temperature was dropping, and we had no idea if inclement weather was on the way. Going ashore seemed out of the question for the woods and brush were very wet, thick, and populated with hungry mosquitoes. Our minds were all busy trying to come up with solutions when we heard a boat motor in the distance. We strained our eyes staring into the increasing darkness and finally saw the boat about half a mile away. We were able to get a spotlight hooked up and began signaling the boat just as it disappeared behind an island. We thought we may have missed our opportunity, but the boat reappeared from behind the island and in a few more seconds began turning back our way.

A few minutes later the boat came along side. It was a small cabin cruiser occupied by husband, wife and son returning from a short evening fishing trip. They were definitely the last boat anywhere on this part of the lake and we were so relieved to see them. We told them what happened and soon we were hooking up a towrope. In about another hour and a half we were back at our resort. Were we just lucky or was someone looking out for us? Of course we thanked the family towing us in profusely and offered to compensate them, but they would not take any money. All they would take was one of our Walleyes so they could have a late-night dinner!

Fast forward to early summer 2006 (just a little over a year later)… The three of us are back at our favorite Canadian lake again. It’s our second night of fishing and we have reminisced about our ordeal from last year several times. We know where the “danger spot” is located and we have saluted in respect each time as we passed the area. As we are coming in from another long day of fishing, the sun has set and darkness is less than a half hour away. We are within a mile of the area of last year’s mishap when we see a fishing boat near the shoreline.

Darkness is imminent so we decide to check out the fishing party to make sure everything is OK. As we come alongside the boat we encounter three fishermen… a young boy about twelve years old, a young man in his thirties, and an older retired gentleman. They look tired and concerned. After greeting them we soon find out they have run out of gasoline and are stranded. They have been using an electric trolling motor that has almost worn down their battery and will soon be useless. Déjà vu  or what? Soon we have a tow rope hooked up to their boat, and with the help of a beautiful full moon rising, we towed them back to their cabin located just a hundred yards down the shoreline from the resort where we were staying. It took about an hour and a half… Did I say déjà vu  or what, again? Needless to say they were extremely grateful. When they offered to pay us for our trouble, we were more than happy to refuse their money. All we could think of is, “What are the chances?”

If we had come in twenty minutes earlier that evening, we probably would not have seen their boat. And even if we had, it would have been a lighter sky and we might not have given them a second thought. The timing had to be perfect… just as it had been when we were rescued a year earlier. Was it all just by chance? Was it just a coincidence? Seems more likely that a power much greater was involved… A lake hundreds of square miles in size, yet two boats stranded in nearly the same spot at nearly the same time of day a year apart are miraculously spotted and towed to safety. What an incredible and humbling experience to be part of… both times! Our time to pay back our favor appeared to be pre-arranged for us!