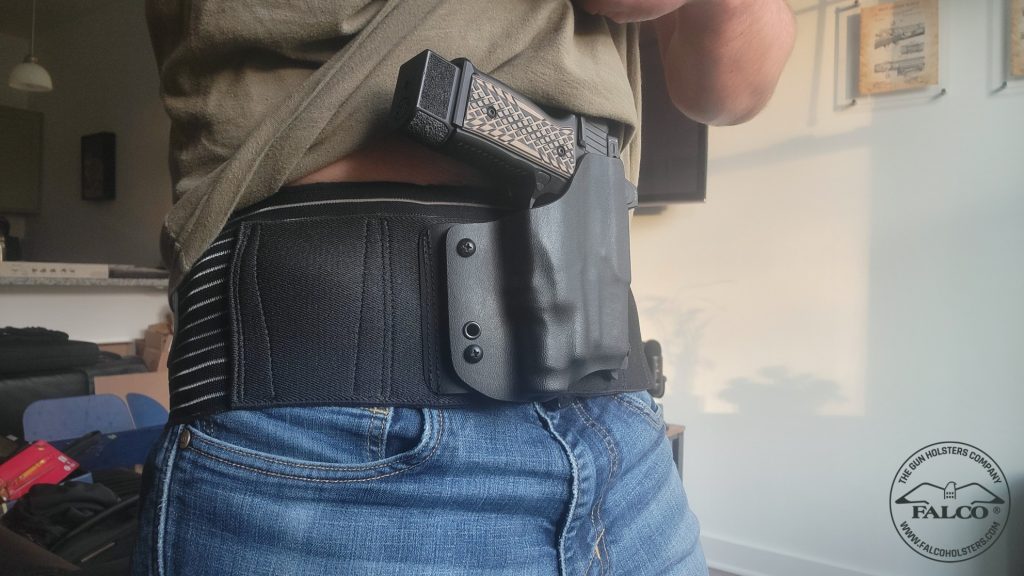 However, one of the biggest issues people often have with the belly band method of concealed carrying is that they often feel unsafe while carrying them. A lot of times this has to do with fears about retention as belly bands normally don’t have a positive method of retention like other Kydex holsters. Other people have concerns regarding accidentally discharging the gun since the areas on a belly band that protect the trigger traditionally do not have rigid sides to protect it. I personally don’t run into these problems, but I understand the fears surrounding them. So today we’ll be looking at Falco Holsters B105 Kydex Reinforced Belly Band which alleviates many of those fears that people have. By the end of this you’ll see the many benefits of the B105 Belly Band Concealed carry holster over some other options on the market.

Belly bands are relatively simple holsters. Most of the time they consist of a simple elastic band that goes around your belly (big surprise) and is secured via hook and loop material on the interior side. The B105 follows this same pattern and is quite similar in nature to Falco’s B103 Breathable belly band. However, unlike the B103, the B105 Belly Band features a Kydex reinforced holster portion that holds the gun instead of just plain fabric. This Kydex portion is essentially a stripped-down holster with custom mounting hardware that attaches it to the elastic belly band via very heavy stitching. I’ve been carrying my SIG Sauer P365 pistol in this belly band and it fits perfectly within the holster and the stitching has been holding up just fine.

The hook and loop area are generously sized with the belly band being maybe just a smidge too tall for my preferences, but this actually adds a fair bit of security to the design and also prevents the band from curling over on itself like other belly bands tend to. The hook and loop are also secured to the elastic band with reinforced stitching and the hook portion spans about 6-inches in length while the hook portion spans 4-inches. This allows for a good amount of adjustment depending on clothing you might wear underneath or if you’ve been shaving off the pounds for your beach body!

Unlike concealed carry leather holsters, this hybrid Kydex holster doesn’t make you sweat a ton and even on hot days the breathable design means that you won’t be overheating the portions of your body that meet it. Holsters for concealed carry need to be constructed well and I think the B105 fits this description quite well. If I could say anything negative about its construction, it would be that I wished that the retaining straps could be removed when they are not in use.

Part of what makes this belly band so cool is that it comes loaded down with tons of storage pockets and concealment pockets. Aside from the primary Kydex retention holster, the band also features six additional pockets. Three of these pockets are on the strong side of the holster with a large compartment underneath the Kydex portion and two smaller pouches on either side of it which are perfectly sized for spare magazines. The same pattern is repeated on the opposite side of the holster and features one smaller pocket for a knife, magazine, or flashlight, one wallet sized pocket and another small pocket which is sized just big enough to hold a large cell phone. The cell phone pocket is the only compartment that has a retention strap and once again I wish it could be removed for when it is not in use but for the most part it stays out of the way as it can be tucked away or attached to the loop portion of the pocket, so it won’t flap around and cause printing issues.

Like lots of other Falco Holsters, the B015 is available in both a left- and right-hand configuration and is compatible with almost as many handguns as the B103 is. The B103 only beats the B105 in the compatibility department because it is by its very nature, a universal holster. However, the B105 offers superior retention because of its Kydex portion which is specifically designed to hold the gun you order it for. If you carry many different guns, my recommendation would be to buy the B103, but if you only run one type of gun for concealed carry and want a belly band and are focused on very solid retention, the B105 is a solid choice.

After carrying the B105 Kydex Reinforced belly band for a couple of months as part of my daily routine, I think the B105 has some very specific situations where it is a better choice than a standard holster or even another plain non-Kydex belly band. The first one of these situations is wintertime. When you’re out for a jog or a run and you want to protect yourself, it can be very hard to find a good holster solution that isn’t just stuffing your gun inside of a fanny pack. While fanny packs are great, they often don’t have proper accommodation for retaining the pistol in a consistent and safe direction.

The second of these situations is when you have a larger overcoat or outer garment, and you don’t have a proper gun belt for a holster. Standard leather belts often are not suitable choices for retaining holsters and gun belts can be much more expensive than normal belts. Belly Band Holsters eliminate the need for a gun belt and holster and instead give you a nice quick way to don your concealed carry gear and get on the move.

So, in closing I have to say that I really like the B105 Belly band holster for concealed carry. By far it is one of the most comfortable SIG P365 Holsters I’ve used since I’ve owned that gun. It offers me more flexibility over my regular SIG P365 Kydex holsters. I may not use it all year around as I tend to wear clothing that is more fitted but for those situations, I always have the option of the B103 which has a much slimmer profile since it does not have the Kydex Reinforcement. If you’re interested in picking up one of the B105 Kydex Reinforced Belly Bands for yourself, you can check out the links below.

Bring Bucks into the Red Zone with Antler King

Going For Gold: Timberdoodles of the Midwest