Roar Of The Red Stag

Escaping our cold Canadian winters for a little holiday is usually on most of our minds over the winter months but this past year has been hard on all of us with COVID-19. Travel restrictions have forced us to stay home and even worse, no gatherings with friends and family with these lockdowns in place across Canada, making it hard on all of us.

Hopefully we can get back to somewhat of a normal world sometime here, as I for one am thinking of the hunts I have planned ahead, as this Global Pandemic has had us all grasping for straws in so many ways. I have been lucky to have headed off somewhere on a winter hunting destination every year for the last number of years thankful that our trip to New Zealand happened just prior to the this Worldwide Pandemic and let me tell you, it was one for the highlight reel.

New Zealand is a hunting paradise and worth every minute of the long flight to get there. Not only are there incredible Red Stag there, but mountain species such as Tahr and Chamois. Truly a world class hunting destination in our off-season as the Roar of the Stag happens in March, which is a perfect time to get away as our Canadian winters are winding down.

Hearing those Stags roar will send chills up your spine and make the hair stand straight up on your neck like no other. Their archaic Roar sounds like something out of the dinosaur ages and until you’ve witnessed it first-hand, it’s indescribable. Their deep growl is something you will never forget.

My girlfriend Amber and I headed over to the south island of New Zealand, as this was her #1 Bucket List hunt, so knowing that I had put together one incredible trip with Wilderness Quest New Zealand which we were both looking so forward to. I’d like to say the plane ride from Canada flew by, but we’d all know I’d be lying, as it was a extremely long trip to get there, throw in a couple delays and it felt like we would never get there. Finally arriving in Christchurch, we were met by our guide, James Ready and the journey into some of the most beautiful country either of us had ever seen began. 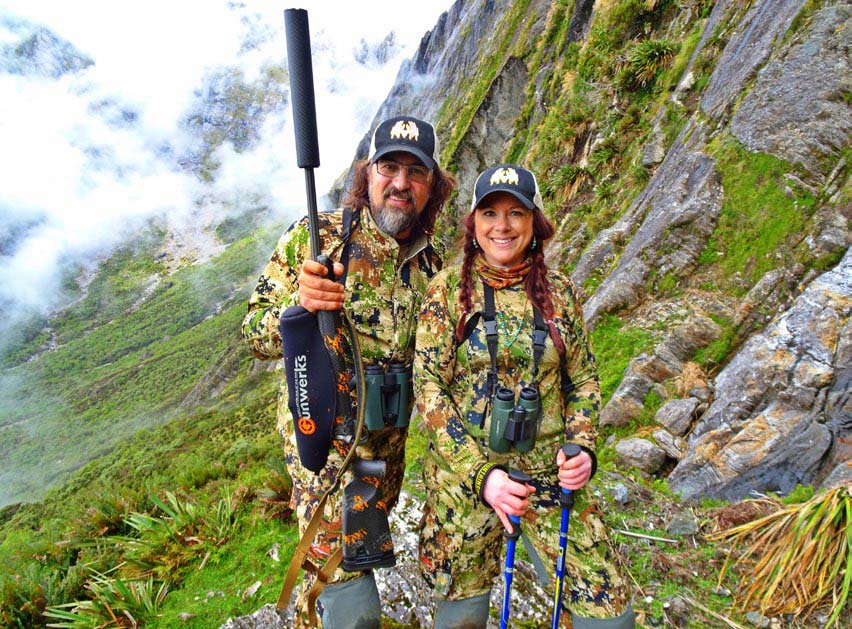 Those that have hunted Internationally know it can sometimes be easier just to use the outfitters rifles on these hunts, as was the case on this trip, it makes travelling so much more relaxed, than trying to lug your firearm through multiple airports and security screenings. We made it to their amazing facilities in time to shoot their rifles, which was great on their incredible range with gongs out to 500 yds. Then back to our incredible lodging for the hunt, which consisted of our very own cabin, complete with everything you could ever dream of, not something I am used to on the International hunts I’ve been on. The meal they prepared that was waiting for us upon arrival rivaled that of a renowned chef, the setting with a world-class trout stream running just below the cabin, proved it to be something out of a dream…It really was a picture perfect situation…But all I could think about was getting out into the mountains to see some of these magnificent Stags firsthand.

We were hunting in the rainforest area of the South Island, an incredible land, lush with vegetation, forest and the most picturesque landscape you could picture a Stag in, a land void of any predators larger than a weasel and even better, no snakes, which I highly dislike! I had a hard time believing it, I knew all the Big Game animals were introduced there many years ago, but this was incredible.

We spent the first morning walking the high country, skirting the edge of some of the gorgeous meadows high on the ridges, glassing and listening, but as the rut of the Stags was just firing up, the action was quieter than I had hoped. We had seen a few by mid-day, nothing to get too excited about, so we continued creeping along glassing the openings along the way, but with the dense forest, anything that wasn’t out in the opening was next to impossible to see.

Late in the first day, our guide James spotted a DANDY Stag bedded along the edge of the timber, so we snuck in close as possible, trying to size him up and see if he was worthy. Amber was second-guessing being done so early in the hunt on a first day Stag, but when I reassured her if she didn’t shoot, I would and suddenly she was all-in. I was filming as the monster finally started to stand to stretch and when he turned broadside, Amber drilled him, dropping him on the spot. I could hardly believe my eyes as we approached her fallen Stag, he was unreal with fronts that were out of this world. Truly one tremendous animal and I was so happy she had just made one of her dreams come true on her #1 Bucket List hunt.

We both had tears of joy as we were soaking in the moment of Amber’s tremendous Stag, now I knew I needed to get one as impressive as hers although I realized that wasn’t going to be easy. The weather forecast sounded like it was turning for the worse, so we decided to head into the mountains for a couple days as I was hoping to hunt Tahr and Chamois on this trip as well although I knew that would limit my chances for a Stag. Leaving us with only a day or two at the end of the hunt to try for one for myself. I hoped by then the rut would have picked up and the Stags would be in Full Roar.

With a great trip into the mountains for Tahr and Chamois, it was now time to return the focus to Stags, although Amber had hoped to try for a Arapawa ram if the chance arose. We awoke the last morning of the hunt to pouring rain, so we geared up and headed out hoping to continue my streak of a last day monster… Now those that have read some of my adventures before, know that it seems like I’m always down to the wire on a hunt before it happens and this was looking like another one, could I keep that last day streak alive?

We were on a high ridge with Stags roaring in the background, when we spotted a group of Rams, and although I knew it would likely blow my morning shot at a Stag, I knew we couldn’t pass up this opportunity and Amber had to try to take one of these big rams. The rain was pouring making visibility tricky, but my Swarovski EL Range binos, gave me a range of 289 yards and Amber was ready, making her shot count on a gorgeous full-curl ram.

So suddenly I started to feel the pressure, we were down to the last few hours of the hunt…Actually we were scheduled to head out at midnight for the long drive to the airport, so it felt like I was in Game 7 of the Stanley Cup, in Triple Overtime with a penalty shot to take it all. The clouds lifted and the Stags were ROARING with two hours of my hunt left, I knew I had one last chance to make it count, if we could just find a Stag worthwhile. We headed up into a higher bowl and as we approached we could hear a raspy roar, the hair was standing up on our necks, slowly creeping up to the edge and there he was…Just a MONSTER, completely oblivious to us, raking his massive antlers in the trees, just thrashing everything in his way.

This Stag had it all, great width, mass for days and points in every direction. I was ready on my shooting sticks, suddenly the wind swirled and he spun around ready to bolt, I sent a round on its way, dropping him out of sight. We couldn’t believe it, with 3 hours to get back to camp, pack and hit the road, we had pulled it off. Once again Amber and I stood in awe over this magnificent Stag, just a beautiful animal, with everything I could’ve dreamt of. Insane mass, points in every direction, polished ivory tips it was the Stag I was hoping for and more.

It was a trip neither of us will ever forget and one that will remain in the top of our highlight reel of hunting trips, we had taken 5 animals in 5 days with 5 shots… One for the books no question about it, New Zealand had lived up to all its expectations and we had finally done it. We will be back again one day to hunt again, that much I know. The Roar of the Red Stag will be etched in our minds forever.

Monster Bulls Of The Prairie Parkland

Some Tips And Tactics For Spring Turkey Season Preparation