Calling All Hogs: Sounds are Key to Hunting Success

I Called, and They Answered

My electronic call had been emitting the sounds of a distressed piglet for several minutes.

Then, out in front of my calling position came a sounder of 10 or 12 wild hogs charging straight toward me. I watched them come from a couple hundred yards along the edge of a cut-over corn field. They came within about 40 yards when they stopped, bristles up on the backs of the sows. They paused long enough for me to settle the crosshairs right behind the jaw, in the center of the neck, on a good “eater” sow weighing about 120 pounds.

While this was a calling session that went perfectly, I can also tell you about times when I tried every sound on the caller’s library and had no sign of a porker. Like calling any other game animal, using sound to entice hogs to within shooting range is not an exact science. But, when it works, few things in the outdoors are more exciting! 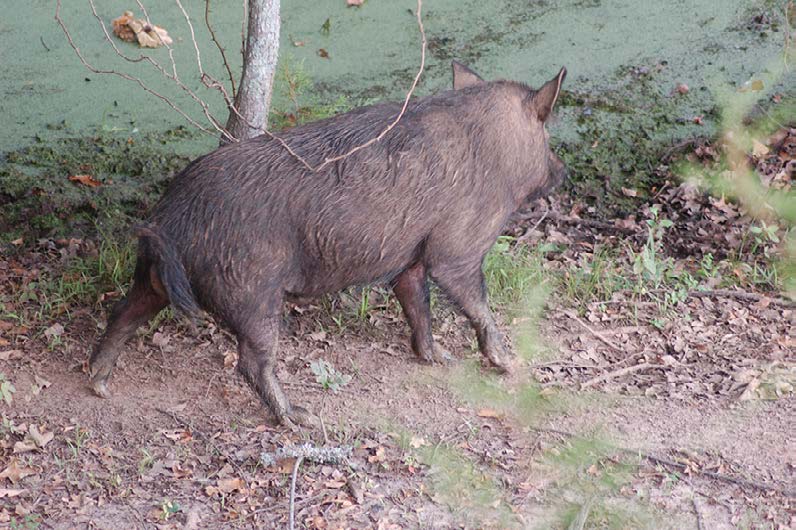 In the past few years, several studies have been done to determine the effects various sounds have on wild hogs. The findings reflect a fact I have known most of my life: hogs are especially responsive to what they hear. Sounds they respond to vary. It could be a twig snapping when a hunter stalks within bow range of a sounder of wild hogs. It could be the low guttural grunts of a sow in estrus. Or it may be the squeal of a piglet in distress. Sounds are definitely a trigger that causes wild hogs to respond with various actions. While the sound of a distressed piglet could cause an entire sounder to charge, the “courting grunts” might be ignored by all but a boar in breeding mode. And, boar hogs are always on the outlook for a receptive sow.

I’ve spent a good bit of time around hogs, both wild and domestic. I learned as a boy that hogs will come running to—or away—from certain sounds. My dad raised domestic hogs. Each fall, when the acorn crop hit the ground, he let the hogs out to fatten on the abundant free crop. Because he wanted to keep check on the porkers, he trained them to the sound of the honking car horn on our old International pickup. I can still see those hogs bounding out of the woods on our little farm, heading toward that honking sound, and the ears of dried corn they knew awaited them.

When the wild hog boom hit full scale in Texas around 1980, I was already a seasoned hog hunter. Being raised in northeast Texas between the Red and Sulphur Rivers, I knew about hunting wild porkers.

About 40 years ago when hog hunting suddenly became a “thing,” folks from far and wide began pouring into Texas to hunt hogs with outfitters. Many of them leased land specifically for hog hunting. At about this time I had my first “official” training in the art of using a call to bring porkers within range of my bow or rifle. I had a good friend from southeast Texas who was a major duck hunter, and he built his own waterfowl calls. He also loved hunting hogs. When he called one day to say he had developed a new way of hunting hogs, I was all ears (no pun)!

My buddy hunted near the Louisiana border on leased land having some very heavy cover. Lots of switch cane grew along the creeks there, and that provided perfect cover for the area’s large number of wild porkers. Because the hogs had made well-worn trails through the vegetation, their travel routes were easy to find.

We determined that the key to success would be to hunt mid-day when the sounders of hogs were bedded back in the thick stuff. We would ease to the edge of the cover, get within bow range, and either find some natural cover to hide behind or quickly fashion makeshift blinds with machetes.

After that, my friend would go to work with that call. He always started with a series of contented grunts like the sounds that undisturbed, feeding hogs make. Occasionally, he’d create a pig squeal, the sound smaller pigs make when being slapped around by bigger hogs. He would also throw in deeper grunts and what he called a courtship call, which was a fast series of softer grunts.

Once he started, he didn’t stop until he either ran out of breath or we shot a hog. Once I learned that wild hogs would readily come to a variety of sounds, I began using his calls and enjoying success. I have found that regardless of the type of call being used, the key to success is simply being within hogs’ hearing distance.

Later, I discovered electronic calls with speakers that could either emit calls at a soft volume or blast sounds out to distant hogs. The first electronic calls I used were cassette tapes. They worked better for me than the mount-blown calls I previously used. The actual sounds were probably recorded from a pen of domestic hogs rather than squeals and grunts made by hogs in the wild. I did enjoy limited success, especially when hunting areas of heavy cover. There I could get relatively close to spots where I expected the porkers to be.

With today’s technology, calling wild hogs has been taken to the next level. For the past several years, I have used an electronic call made by Convergent Hunting Solutions called “The Bullet HP.” As anyone with experience calling game knows, the animals don’t always come running, regardless of how good the call sounds. This holds true with everything from predators to waterfowl.

However, I’ve learned that the odds of getting a wild hog within shooting range are very good. I’d estimate them as being about 60 percent for times when I’m calling in areas nearby the hogs. I usually can at least bring them out of cover. Getting them out into the open for a killing shot is sometimes a different matter, though. Especially considering the heavy cover areas where I often hunt.

When I’ve been hunting relatively open ranchland, I’ve watched hogs come from several hundred yards to the sound of the call when I turn the speaker to high volume. Lone boars often come in slowly, stopping frequently with their snout in the air to test the wind. Sometimes sounders of hogs with sows come in at a gallop to the sound of what they think is a piglet in distress.

Because of hogs’ excellent sense of smell, it’s important to set up downwind of the area where you are calling. While hogs are not nearly as sensitive to movement as turkeys or deer are, don’t think for a minute that they can’t see well. Especially when you’re positioned in open cover. One reason many people think hogs are “half-blind” is that they are low to the ground, so weeds and brush often limit their vision. I have experienced having hogs who were out in the open spook when they spotted me 300 yards away. Rather than set up a portable blind when calling, I usually fashion a brush blind or just conceal myself in cover. First, I make sure I have good visibility out in front and to the sides of my setup.

I’ve found the distressed piglet sound to be very effective in triggering a response from a sounder of hogs. The sound of an aggressive boar or boar fight can also be effective, especially for calling in boars. I’ve noticed one thing that’s true for boar hogs, much as it is for Whitetail bucks. You can often see a “satellite” younger buck skirting around an area where there’s a receptive doe. Most likely hoping to move in on it while other “big boys” are battling. On many occasions, I’ve had younger boars skirt the area around my calling location. The big porkers will usually come straight toward the sound instead. They won’t be at a dead run, but they usually come straight toward the call with a cautious, stop-and-go gait.

Much of my calling has been done during daylight hours, although hunting after the sun sets can be extremely exciting. I have an AGM Rattler thermal scope mounted on my little .223 bolt action Mossberg Patrol rifle for night hunting. Some folks say my caliber choice is too light for hunting hogs. That might be so if shooting running hogs at several hundred yards. But for close work, when I can place my shots in the neck just behind the ear, I’ve found it works great. I love wild pork and have found this caliber and shot placement destroys very little meat. I also don’t have to spend time searching for wounded hogs in the dark.

Calling wild hogs is just another tool for putting meat in the freezer. If you are new to this idea, you might want to give it a try. Hog hunting isn’t quite as simple as setting up your electronic caller, hitting a button on your cell phone to trigger an app, flipping the safety off your rifle, and shooting a hog every time. First, you have to pattern the hogs. Then you must study the terrain to determine which locations to set up in that is best for success. I can tell you for certain that when you watch that lone boar or sounder of wild porkers heading toward your calling position, your adrenaline level will likely go through the roof! It can be challenging keeping those crosshairs steady with a toothy boar coming your way at close quarters!

Luke was raised in very rural Red River County where he grew up hunting and fishing. He began amateurishly writing about his adventures at the age of 12, the accounts of his boyhood outings often filling several pages of his Big Chief tablets. Luke began writing professionally while in his twenties and currently writes an outdoor newspaper column that runs weekly in 40 Texas newspapers.

Luke is hunting/shooting columnist for Texas Wildlife Magazine and writes regular features for several other outdoor magazines including Airgun Hobbyist where he is Hunting Editor.

Radio is a fun endeavor for Luke and his shows are known for his relaxed and down home style WWW.CATFISHRADIO.ORG Luke is on the pro staff of Airforce Airguns, Smokin Tex Electric Smokers, and TRHP Outdoors. Luke and his long time friend Larry Weishuhn also produce a bi-weekly internet radio show titled HUNTING WIRE RADIO and Sporting Classics Radio on Sporting Classics Daily.com

Luke covered hunting for the Texas Almanac, one of the oldest and most revered publications in the state. With almost 38 years under his belt as an outdoors writer, Luke has no intention of slowing down anytime soon. He continues to love the lifestyle that has been so fulfilling throughout his life.

View all posts by Luke Clayton

Creating Great Experiences For The Next Generation

Roar Of The Red Stag

Bring Bucks into the Red Zone with Antler King

Going For Gold: Timberdoodles of the Midwest