British Columbia prides itself on being the home to a vast variety of native fish species that inhabit the plentiful waterways this province has to offer. Anglers have a seemingly unlimited selection at their fingertips through every season and every method possible. Despite a heavy incentive on maintaining and protecting B.C.’s diverse indigenous populations there are a few non-native fish species that have been introduced and are climbing the ranks within the sport fishing community. There has been pushback against aggressive, illegally introduced, invasive species that threaten important stocks such as salmon and steelhead but one black-jawed, football shaped specimen has demonstrated that controlled management can provide fun recreational options in B.C. 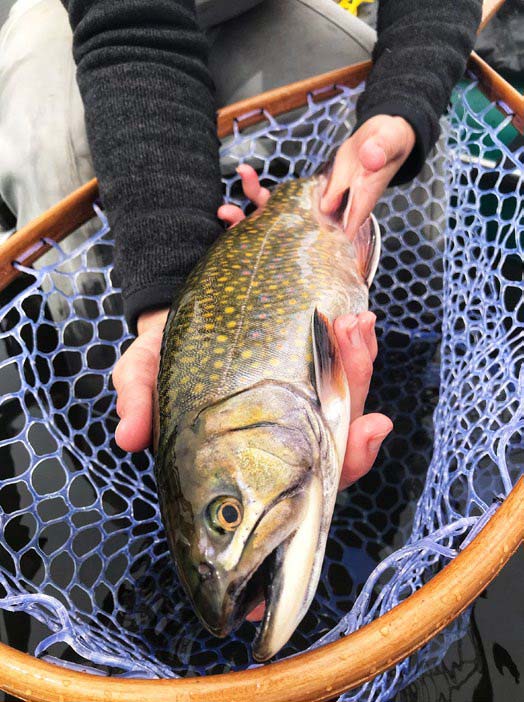 Eastern Brook Char, Salvelinus fontinalis, are not native west of the Rockies and have a unique, exotic beauty that provide an exciting alternative to local trout species. Affectionally shortened to ‘brookies’ and often referred to incorrectly as ‘brook trout’, this char species was introduced into B.C. waters around 1910 through both unintentional and unauthorized means. After their introduction the Freshwater Fisheries Society of B.C. began to farm and release this species into specific water bodies throughout the province. The Society utilizes an eastern Canadian strain originally from Ontario and raises them in a contained lake near Kamloops for distribution. Brook char can survive a greater range of temperature fluctuations as well as tolerate acidic conditions that other native trout species cannot making them highly adaptable and perfect for stocking. Unlike rainbow trout, brook char do not require running water to spawn thus can survive in lakes without inflow or outflow streams and can provide consistent angling throughout the year. Brookies are of excellent consumption quality and are extremely aggressive, non-picky eaters that are perfect for all angling abilities.

A number of lakes in the southern interior as well as the Cariboo region have excellent options for brook char fisheries. Stocking consists of all female triploid fish, with some rare exceptions, that range in size from fingerlings at three to seven grams and yearlings averaging eight to nine grams. Because brook char are prone to hybridization with other species they are sterile or ‘triploid’ to avoid mixing with native populations. Although size averages range from one to three pounds, fish in excess of five pounds are lingering in the depths of some lakes. Brook char are aggressive feeders and are not fussy when it comes to a meal. They can be targeted during any month and are a favorite among many ice anglers. Adult brookies will consume everything from other fish to surface bugs making them a dream for both fly and conventional gear types.

Fly fishing for brook char can be an endless amount of fun as these hard-hitting predators can have a reel screaming in no time. Typical five or six weight trout setups are ideal, and anglers should have both floating as well as sinking lines ready. Brook char will take chironomids under a strike indicator however active presentations such as stripping leeches, streamers, or nymphs is extremely effective. Positioning oneself near a weed bed or drop off allows for a variety of tactics. Casting a floating line into the reeds with a subsurface presentation such as a nymph, small leech, or boatman during the morning or evening can entice fish waiting for an easy meal. Trolling or casting a faster sinking line with a larger leech or streamer pattern along a sharp drop off will draw cruising fish throughout the day. Fishing water boatmen on or just below the surface during the fall months can be a feeding frenzy that anglers do not want to miss. It is important to change up stripping or trolling speeds and determine what is working on that particular day, on that specific lake as conditions change regularly.

If fishing with conventional gear, casting spoons or spinners is a great choice as brook char will purse anything that mimics a smaller fish or bright attractor. Trolling spoons or larger willow leaf rigs will also get the job done along drop offs or grasses. Worms or artificial presentations under a bobber is the proven go-to and where permitted, fishing bait is always an effective option. Always be sure to check the regulations prior to visiting any new body of water. Many anglers seek out brook char lakes during the winter months as this species thrives under the ice. Because of their high adaptability and active nature during colder temperatures they are an excellent and sought out target for ice anglers. Small tungsten jigs rigged with or without an attractant such as worms, power bait or shrimp are key although small light spoons will also work well. Ice fishing in shallower water roughly three to ten feet is often enough and structure such as submerged trees or large rocks are an added bonus. Pulling a fat brookie through the ice can brighten any angler’s day on a chilly winter adventure.

Although anglers are grateful for the cornucopia of fishing pursuits here in our western most province, having the privilege to target a well-established exotic species is a luxury we should take advantage of. Brook char are a fun, hearty, and aggressive fish that have found their place among other local favorites such as trout or salmon. If you have yet had the chance to pursue this species I would highly recommend making a point to hook up with one! Brook char lakes are littered throughout B.C. and weekend adventures or single day trips are easily planned. The Freshwater Fisheries Society of B.C. lists all their stocking histories so determining which lakes house these beautiful little chars can be done with relative ease. As the spring season approaches and ice off begins, I suggest putting brook char on your list as you will not be disappointed!