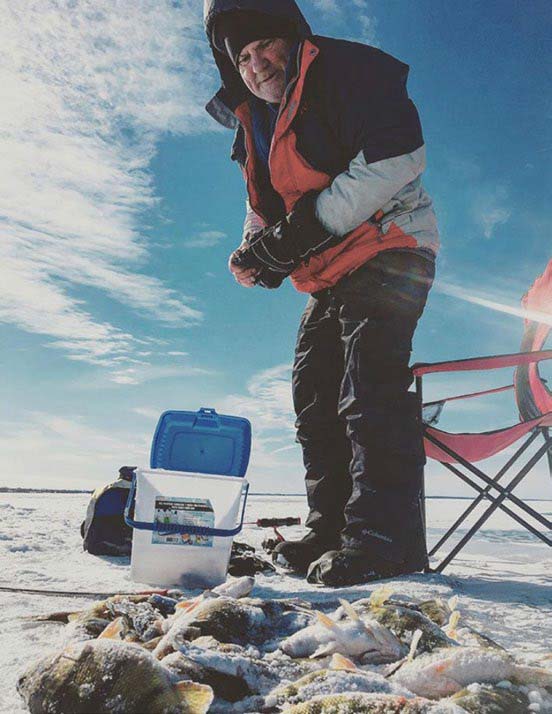 I’d positioned myself a few hundred yards away from Shanty town on Big Bay as the sun hit its high-noon position in the sky. Across the mud flat, I walked through the snow and cut 8 holes from one end to the other, covering the whole thing – maybe 120 yards long by 50 yards wide. From here I could watch the weekend warriors gliding on their sleds back and forth from shore to the huts, dozens upon dozens of which were huddled together in their usual spots by the marker, searching for those Quinte giants, monstrous Walleye fresh out of Lake Ontario on their way to stage and spawn. Of course, that’s not at all why I’m here. I’m over this mud flat hunting Jumbo Perch, alone.

It’s no secret that Ontario is home to some of the most prolific Jumbo Perch fishing on the country. Lake Erie and Lake Simcoe are the two most notable of the list, but the Bay of Quinte goes largely unnoticed. More well-known for its incredible Walleye fishing, not to mention the beasts that haunt the waters in the winter, of which most ice fishermen travel from a wide range of distances to take part in, here too lies a magnificent place to catch copious amounts of Jumbo Perch, some reaching sizes over 15” in length. The fishery is in such a good state of affairs that there’s a commercial fishery on the bay for these exact same Perch. There’s a number of reasons as to why there are so few dedicated ice anglers chasing these fish around out on the bay. The obvious reasons are that the hoards of weekend warriors come here to chase Walleye and only Walleye. Another is that while it’s quite common to be targeting Walleye and cross paths with a few Jumbo Perch in the process, the large schools of these fish frequent areas different from the Walleye – In fact it seems that in some cases the Yellow Perch avoid the schools of roaming Walleye altogether. My Jumbo hunts usually start with a mud flat in 17ft-20ft of water, a dozen or so holes cut in the ice, and a whole lot of searching once January pushes the fish into deeper water, and the ice is safe enough to explore. Before freeze up, the Perch are still up shallow, relating to the edges of any green vegetation that might be holding food, but as the vegetation dies back, they begin to move onto these flats looking for alternative food sources which is made of mostly of baitfish and mud worms (a very tiny reddish-brown worm, which they will cough up once hooked).

Yes, while Walleye may also hang out in areas like this, they don’t hang around like the Jumbo’s do. The Perch ultimately stick to these flats for longer amounts of time than they might at other periods of the year, making winter the time to key in on them. Once you find them, it’s possible to return numerous times over the winter and find schools of Jumbos over the same flats. Factoring in the predator aspect, a big Northern Pike is all that it takes to spook the Perch out of an area indefinitely, but a big push of migratory Walleye moving through the area will also throw the fishing off just as much as a cold front. If you’re hell bent on getting into Jumbo Perch and find you’re marking more Walleye than anything else, move on.

While covering a mud flat is usually a good way to start locating fish relatively quickly, another good place to locate fish is the bottom edge of a drop off. Something I’ve made multiple notes of over the years is that these fish are almost always full of large baitfish – sometimes 3”- 4” in length, and these tend to be where I locate the biggest fish. We’re not talking numbers as much as we are quality, but that isn’t a hard rule, and sometimes the Perch can pile into these areas. Here, I like to use larger jigging spoons that make a lot of noise because as I mentioned, the fish are usually more spread out. Once they hear the dinner bell ringing, it doesn’t take them long to show up. These bigger Perch, which are usually between 12” to 15” in length, aren’t as aggressive as their smaller brothers and sisters, so when I start marking fish, I switch things up and start tipping my lure with half of a minnow instead of a full one. More often than not, you’ll pick up every fish you mark by doing this.

Another prime place to locate fish are subtle depressions in the bottom which can be located using Navionics. These are essentially bowl-shaped depressions where Jumbo Perch seem to stack into presumably to feed on those same mud worms. These bowls aren’t overly large – sometimes only 10-15 yards wide, but the Jumbo Perch utilize them just the same. These bowls seem to occur in areas with a significant amount of current, which I’ve always assumed is another reason why they show up here. The theory is that they’ll duck into the bowls to escape the current, which also drifts food right to them, too. If I cannot locate good numbers of jumbos out on the flats, these are my go-to locations.

My first run in’s with these Jumbos occurred while looking for Walleye, and though I’m certain that sticking with that kind of gear would have landed me with great days of stellar Perch fishing, I’ve refined what my setups look like for maximum efficiency. There’s always the chance of connecting with a Walleye upwards of 15lbs, so I like an ice rod with a little more backbone, but just as important is a tip that is sensitive enough to feel those light strikes. More importantly is what line to use, and with my setups it’s been proven that Micro Ice in 2lb-4lb is ideal based on its durability alone. I can rig up a 2lb fluorocarbon leader attached with a micro swivel comes in handy if you’re marking fish that seem reluctant to take.

In terms of lures, above all else, it can’t be stressed enough how effective using a jig that actually looks like a small Perch can be. While Jumbo Perch school, they compete with each other for food. A truly giant Jumbo has no problem taking “candy from a baby” as the saying goes, so a lot of what gets tied onto the end of my line follows suit. Northland Forage minnows in Perch pattern, or even better, the Buck Shit Rattle Spoon both work well, but a Rapala Jigging Rap in the same pattern can be deadly. It pays to tip these with a slightly bigger minnow than you’d think was necessary, but it will cut down on the amount of smaller Perch you tie into, and give the Jumbos you’re looking for a bit more incentive to commit.