Creating Great Experiences For The Next Generation

Here’s to Passing On the Traditions of Hunting

Hunting is something that means more than simply harvesting an animal. It also means spending  quality  family  time  around  a campfire, meeting new friends, putting in off-season work, and listening to stories from times of old.

Around the age of six, my father made great efforts to teach me the ways of hunting, and those lessons have stuck with me to this day. Quite frankly, hunting kept me out of a lot of trouble, because that’s what I focused my attention on (aside from God). Taking the time to introduce kids to hunting is something that is even more important now, I believe, due to the current situation of our world.

Recently, during the Tennessee Youth Hunt, I was on a hunt in west Tennessee with Chase Headly and his boys. The night before we arrived, we were excited as always, hoping for a successful hunt.

Before putting the boat in the water, we always do a test fire is in order to make sure the motor is running properly. Upon turning the key though, a huge flame shot forth from the muffler and the engine wouldn’t start. After checking all of the spark plugs as well as wiring connections, we realized there was gas in the oil. That isn’t a good situation, even without any knowledge about how the new computerized mud motors operate. 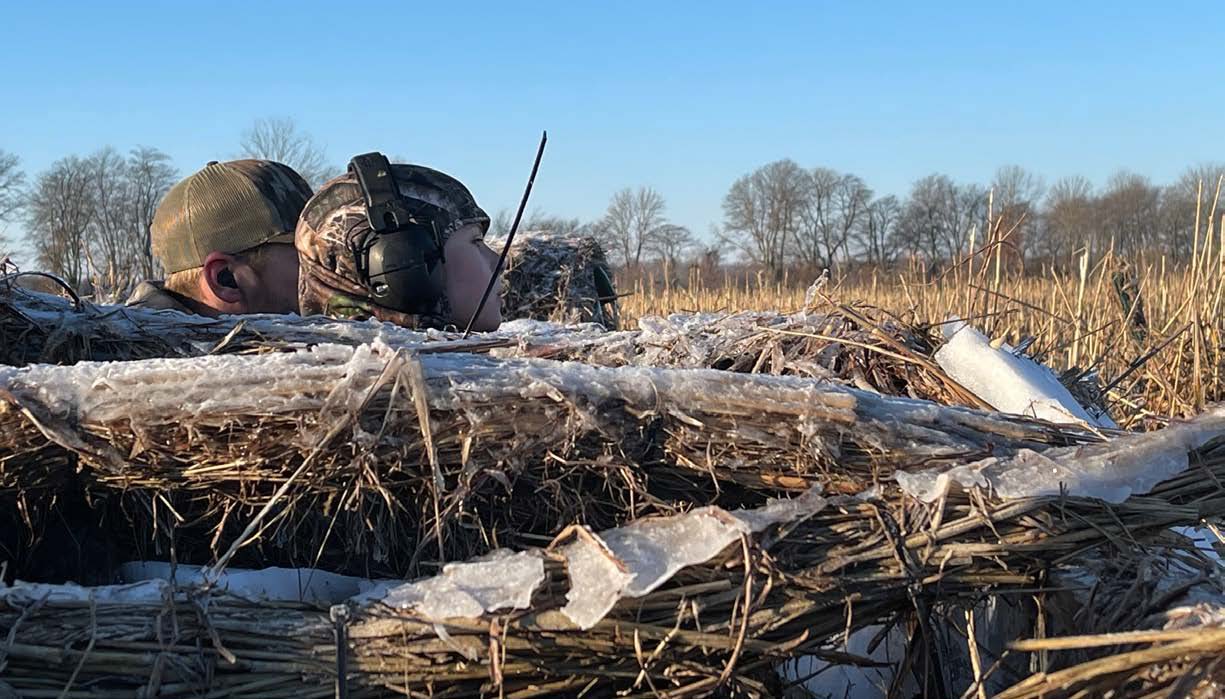 We were feeling distressed because the hunt seemed to be over, but then Chase and I began making calls to see if there was anyone in the area who had a boat we could use. The first person on my list was Scott Graves, who runs Special Ops Xcursions. This organization is all-volunteer and nonprofit, and it’s devoted to making a difference in the Special Operations Forces (SOF) community via outdoor adventures. They provide active- duty SOF service members, their teams, and their family members with outdoor adventures.

Scott immediately went to work trying to help us find a boat, or somewhere else to hunt. Within a few minutes, he made an introduction for me to his friend, who had an open spot in a pit blind just over the Kentucky line. The pit was located among flooded corn that was the only open hole for miles, due to an intense ice storm that made roads almost impassable.

If you’re an avid duck hunter, this means a lot of ducks were going to be working this spot for the kids. We arrived a little early, but simply thankful for a place to hunt with no expectations other than a great breakfast.

The temperature was so cold that the side-by-side wouldn’t start. So, we began walking after a short ride in the truck. Chase had to carry his boys on his back one by one because the water was too deep, and they didn’t have waders. I have to say this wasn’t a normal pit and the ducks were plentiful. Upon arrival, all that could be heard were the sounds of mallards, pintails, and wigeons that were packed in the field.

Then, a switch was flipped, lights flashed displaying an extremely well-designed blind that was equipped with heaters and a kitchen. Once the gear had been placed in the shooting lanes for the boys, we began setting decoys. While setting, the spread ducks were trying to land around us. At this point, I knew the kids were going to at least be able to shoot a lot and have a good time doing it. After getting settled in, the lights were turned off and the sky was full of waterfowl with ducks bombing the spread in every direction. Pintails literally were feet from the blind. A pintail is one of the weariest birds that can be hunted, so seeing them act like this was a sight for sore eyes. They were smart enough to come in before shooting light, though. As shooting time closed in, ducks continued working the spread and incited excitement that was at an all-time high throughout the blind. With the clock striking that magical time, shots erupted from the blind and ducks began to fall.

Honestly, I was more fulfilled watching them shoot mallards than if I were doing it myself. All morning long, there were gadwalls, mallards, pintails, and a few wood ducks that worked perfectly within shooting range for them.

These young fellas were reload- ing as fast as they could shoot. Let me tell you, these boys can shoot! In fact, they shot their limits of mal- lards, and had only one hen. There were other species such as pintails, gadwall, and wood ducks that were harvested throughout the hunt, but seeing the excitement on their faces was worth it all.

Although the shooting was great, it was time to break out the eggs and bacon. Listen, breakfast in the duck blind isn’t complete without biscuits and garlic Texas toast covered in cheese. Talk about enjoyable! Running a duck call while cooking for the next generation of hunters is something I’ll gladly do every year. Breakfast is all part of the experience but learning how to interact with others and forge lifelong friendships is what hunting is all about. I must say that God has a way of showing his sense of humor when our plans seem so good.

You know, there is something special about the smell of spent gunpowder and bacon being cooked that really brings me back to childhood experiences with my dad. It actually brings so much excitement, knowing that before long, I’ll be taking my own son on hunts like this. He is still too young for this season. But in years to come, he’ll be by my side learning why I love the woods—but more importantly, learning how to conserve wildlife habitat while managing the population for the following years.

At the end of the day this time, these young hunters were able to be on one of the best duck hunts they have probably ever seen and one that will give them the drive to continue doing this going forward in their lives.

There are actually a lot of life lessons that can be learned while afield, the kind of lessons that cannot be taught in a classroom. I am humbled to have had the opportunity to be involved with this hunt and I look forward to doing it again.

Remember, young hunters are the key to the longevity of hunting. They’re the ones who will fill our shoes when the time comes that we’re not capable of hunting anymore. Taking a kid hunting can greatly change a person’s life. I want to give a huge thank you to Scott Graves for setting this special experience up for us!

Ben Cole was raised in northeast Alabama, where he learned the ways of the woods from his father. He has spent over 20 years hunting a variety of animal species across the United States. He is a published outdoor content writer, an avid wildlife photographer, and multifaceted marketing strategist. His wonderful wife, Melissa, pushes his creativity and shares his big dreams. Currently, he is working to complete the North American Grand Slam. He loves to share how Christ changes his life daily. His outdoor show, Rooted Television, debuts in the spring of 2022.

View all posts by Ben Cole

6 Tips For Your Best Hunting Season Yet