We approached the clearing that punched a hole in the thick lodgepole pines, underbrush, blowdowns and dead sloughs and caught sight of the big boar we’d been following all morning. Despite the nearly impossible task of staying silent while slipping off of logs and into mud holes and dodging a million dry branches while skirting fallen pines we had managed to get the drop on a nice bruin and we were now about 30 yards from him, wind in our faces and almost within bow range. 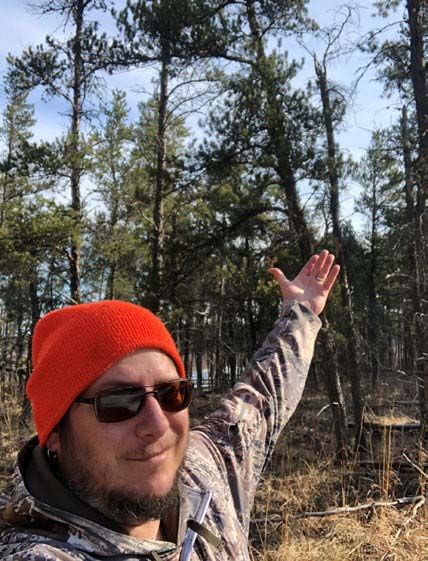 I needed to close another 10 – 15 yards before I felt comfortable taking my shot and so I quietly dropped my day pack, crouched low and began to creep along the edge of the clearing, doing my best to keep the wind in my favour and praying not to step on any errant twigs I’d missed. As a longbow hunter I prefer the somewhat controllable environment of a tree stand and bait site, however when my good friend Jason suggested we attempt a spot and stalk bear hunt I jumped at the chance. We had done a spot and stalk turkey hunt the year before together and were successful plus this would be the challenge of a lifetime and if nothing else, I love a challenge, so off we went.

My approach was looking good, the bruin was happily munching on the tender shoots of grasses and leaf buds that were emerging from the Spring brown and didn’t so much as turn his head as I slowly cut the distance. 30, 25, 20 yards. I was almost in position to take my shot. “Another 5 yards and we’ll be worrying about dragging this beast out of here” I thought to myself. 19 yards, 18 yards, 17 yards… SNAP! In my attempt to cut 2 more yards I stepped on an unseen branch. Rookie move. The bruins head shot up and without so much as a second’s hesitation he was off and running for the hills.

After what felt like an eternity of sitting and silently cursing my fat feet, Jason sidled up to me and whispered, “well that was exciting”. It was exciting. My heart was pounding from the adrenaline dump and my legs were shaking from my slow stalk. Going into this hunt I would have told you that it was impossible to get so close to a black bear without a tree stand but I learned that not only is it possible it might be my new favourite way to hunt bears.

Finding black bears on a spot and stalk, particularly in thick brush country like we were hunting necessitates understanding black bear movement during the spring months. Early to mid April sees bears waking up and starting to move around. Initially close to their den spots, they start to look for any source of food energy that they can find, but they’ve got to be careful as they need to get their digestive systems fully back online so they favour tender grasses and shoots. A great way to find black bear tracks is to start looking on the edge of unused logging or ATV trails. Especially if there is a water source beside the trail. This water source promotes plant growth and tend to provide shoots earlier than the deep shady timber. Start looking around near the water source for bear paw prints. The softer soil or sand should provide plenty of evidence if a bear is using the area.

Black bears prefer dense darker forest that has easy access to food and water. This dense forest provides shade and cover during the heat of the day especially during late spring, so if you’re hoping to spot a black bear, figuring out where and what he’s eating is priority number one. Finding black bears in the thick timber is challenging even under the perfect circumstances, so often once you’ve located fresh bear sign and grazing sites, it’s time to back off, pull out the binoculars and watch for bears coming in.

Once you’ve identified what the bears are eating, it’s time to start looking for bear sign. Obviously paw prints are a strong indication of bears in the area, however it is also possible to judge the approximate size of a bear by their print. Simply measure the width of the front paw print and then add one. So, a 5-inch paw print suggests a 6 foot hide or in other words, a mature bear.

Looking for scat is another sure-fire way to determine if a bear Is in the neighbourhood. If there’s fresh scat you know that a bear has been recently feeding. In the case of our failed stalk, we had come across fresh scat earlier in the day and an obvious trail that the bear was using to travel from the easy grazing of the ATV trail we were walking to the clearing where he had a buffet all to himself.

Scat size can also help you judge the size of a bear. If it’s small and thin, chances are you’re looking at cub scat. Generally, you’ll find larger scat near the cub scat, which suggests a sow and cubs. Time to back out and look for a different spot. If you’re finding large scat, anything with a wider diameter than the base of your thumb, you can at least determine that you’re looking at a mature bear.

Another sign to look for is claw marks in the trees. Bears tend to mark trees during the mating season. They will rub their shoulders and neck against the tree and will even claw and bite the tree. Finding a marking tree along a bear trail is sure sign that there is a mature boar in the area. A good marking tree tends to not have a lot of ground cover around it, which allows the bear to see if other bears are coming in. The tree will generally lean slightly towards the bear trail and bears have even been known to rub against hydro poles. If you’re hunting in late May as bears are starting to think about mating, look for claw and bite marks 6 or so feet up the tree. You may also find hair stuck in the bark at around the 2-3-foot mark.

Black Bears tend to be most active near dawn and dusk, however in the early spring there’s a good chance to find bears out in the early afternoon, enjoying the warmth of the sun after a long dark winter under the snow.

Get out and Hunt:

Perhaps the most important part of spot and stalk hunting for black bear is to get out to the woods and put the time in. Not only is it always a nice day when you’re in the woods, but you have to prepare to put the miles on. Packing light and wearing good boots is super important and you should expect to be out from dawn until last light. Later if you kill a bear in the late afternoon or early evening.

Finally, while many States and Provinces don’t require you to keep the meat from a bear, if you waste the meat, you’re depriving yourself of one of the mildest most delicious proteins available. There’s a reason why bear populations were decimated during the market hunting days. Settlers greatly preferred black bear to almost any other game meat for a reason. Anyone that tells you differently either can’t cook, isn’t good a processing game or is being lazy about hauling out the meat.

Bear meat itself can be compared to beef when done up like a pot roast, stew or ground into burger, and prepared like pork if you decide to make sausage, or even bear backstraps. You can find an amazing Candied Bear Backstrap recipe that I cook for my family all the time right here: https://www.youtube.com/watch?v=haNHD7GEgfs&t=21s. Just remember that bear, like pork can contain Trichinosis, a parasitic disease caused by round worms so however you prepare your bear ensure that it is cooked to a minimum of 160 F.

Noel Linsey is a writer, photographer and videographer based out of Winnipeg, MB Canada. Noel has dedicated his life as well as much of his career to pursuing the great outdoors lifestyle and can be found hunting, fishing, trapping, or canoeing (depending on the season) throughout Manitoba. When not in the woods or on the water Noel can be found running Canada’s highways and trails on his motorcycle. Noel loves to write about all things outdoors, with a particular passion for fly fishing, back country travel and his beloved canoe. When not writing about the outdoors, Noel also loves to write about motorcycles and motorcycle adventure.

View all posts by Noel Linsey

Whitetail Deer: Calling Tactics To Draw In A Buck

A Guide To Rediscovering Family Showshoeing